The sale was led by Winter Decoration—a large-scale view of Lambertville by celebrated Pennsylvania Impressionist Fern Isabel Coppedge (1883-1951)—that more than doubled its pre-sale low estimate of $100,000 to achieve $252,000. New world auction records were set for both Philadelphia Illustration Artist Sarah S. Stilwell Weber (1878-1939) and Emma Fordyce MacRae (1887-1974), a graduate of the Pennsylvania Academy of the Fine Arts and member of the Philadelphia Ten. Weber’s Three of Us (Saturday Evening Post Cover) elicited spirited competition and exceeded expectations, shattering the existing world auction record of $52,000 to realize $119,700 against an estimate of $30,000-50,000. MacRae’s Melina in Green sparked a lengthy bidding war that ultimately saw the striking portrait achieve $63,000—easily surpassing its $8,000-12,000 estimate as well as the 2008 world auction record of $23,750. 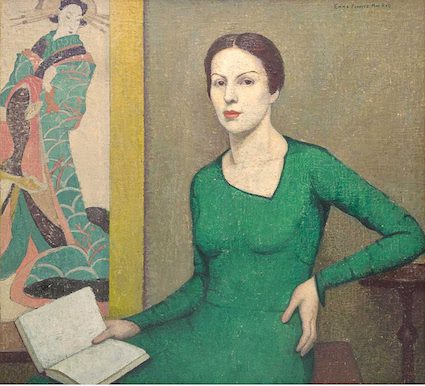 The sale also garnered strong interest for works by 19th century artists that were fittingly exhibited salon-style in the gallery. Highlights from this collecting category included Still Life with New York Tribune, Beer Stein, Pipe and Tobacco by William Michael Harnett (1848-1892) and Near the Outlet of the Waccasassa River, Florida by Hermann Herzog (1832-1932), which sold for $69,300 and $40,950, respectively.

Freeman’s June 7 Collect: American Art Sale was led by a new world auction record for William Formby Halsall (1841-1919); Gay Head in Winter soared past its $2,000-3,000 estimate to realize $37,500. A similarly strong result was achieved for Manuel Azadigian (1901-1924), whose Spring in the Valley sold for $15,120—over five times its pre-sale low estimate of $3,000. The sale marked a rare auction appearance for the Armenian-American artist, who had a short career on account of his untimely death.

“These back-to-back sales once again proved our long-held belief that works most often sell best where they were made, and we are proud to extend the list of Philadelphia artists for whom we hold the auction record,” remarked Chairman Alasdair Nichol. “Collectors’ tastes are diversifying, and we are excited by the continuing opportunity to usher formerly overlooked artists into the spotlight.”